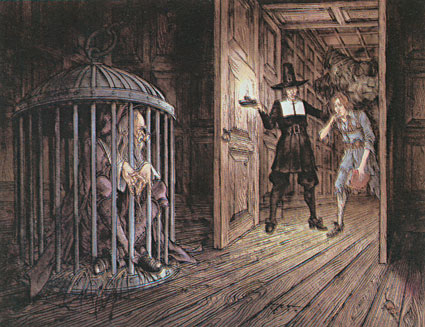 What do Donald Trump and Bernie Sanders supporters have in common? They express anger at “big” industries, such as government or business. As seemingly oppositional as these anti-establishment groups are, I would suggest that they are more similar than any would like to admit. It is a force that is not as specific as big government or capitalism, but the overwhelming power of Bureaucracy.

In Bureaucracy written a full century ago, Max Weber discussed his idea of the iron cage that traps all of us in a system of endless efficiency and control. Not all bureaucracies put the cage around people, and some small levels of hierarchy are often necessary to avoid anarchy. Without rules, all members of an organization might act inappropriately without fear of reprisal. Therefore, a rational system must exist. However, once this hierarchy becomes too focused on efficiency, and loses the personal interactions with one another, the cage begins to entrap us.

The rallying cry of the neo-liberalist Donald Trump movement is that the federal government has become so large that the citizens have become subjects rather than employers. They believe that the government tells you what your kids will learn in school and what you can and cannot eat, drink, smoke, or otherwise consume. They spend your money on services that may violate your personal ethical and religious beliefs. We cannot drive, hunt, own a firearm, vote, and even build a fence on your own property without government license.

If you have an issue with any of these directives, you must work your way up through a tangled web of bureaucratic specialists that send you from one department to the next until your head spins and frustration mounts. One unintentional consequence of a bureaucracy is that while an institution increases its internal efficiency, clients may suffer from external inefficiency.

The rise in Marxism in our national discourse – especially among college students – has ushered in an all-out assault on capitalism. Bernie Sanders (I-Vermont) is the first avowed Socialist in my lifetime that posed an actual alternative to mainstream politicians during his 2016 Democrat Party Primary run. His message of high taxes on the wealthy and a $15 an hour minimum wage is resonating with low income voters.

Employers can now underpay workers because of high unemployment. Cashiers at McDonald’s or Wal-Mart can be easily replaced, so why bother with their happiness? Those corporations have become so large that low level employees rarely if ever meet the head of the company. Each store is a hierarchy of management, assistant management, human resources, and low skilled labor. Each store manager must report to district or regional managers, who report to corporate headquarters, who passes information even further up the chain.

The current capitalist climate is not a celebration of diversity, but silencing those who disagree with elites. Not only has amoral capitalism led to impersonal relationships and low wages, but a level of political correctness and intolerance of “unpopular” personal beliefs unseen in my lifetime. Are you upset by the removal of “Merry Christmas” from stores, forcing workers to come in on religious holidays, or watching people get trampled to death on Black Friday? Capitalism, not government regulation, is to blame.

The Black Lives Matter movement is gaining momentum due to the frustration with the racial disparities found at multiple levels of the criminal justice system – filled with agents of government – from ground-level police interactions to unfair sentencing in the courtroom. However, the bureaucratic power of “the system” allows for cases to fall through the cracks and often hinders the speedy investigation and subsequent trial that Americans are guaranteed in the Sixth Amendment.

Capitalism is not inherently good. Unhinged, unchecked, and amoral capitalism is just as oppressive and intolerant as government. Weber appropriately titled his famous work The Protestant Ethic and the Spirit of Capitalism. He posited that the Protestant ethic of hard work and spreading of wealth through capital expansion, rather than hoarding, assisted greatly in the capitalist boom throughout Europe and into the United States. What we are missing in our current economic system is that ethic. Rather than entrepreneurs taking enough profit to live comfortably and ensuring that their employees earn a decent wage, big business has become incredibly efficient and bureaucratic.

The Bureaucracy is everywhere, and our entire society has become trapped in the iron cage. Is it no wonder we see civil unrest? Occupy, the Tea Party, Black Lives Matter, Bernie Sanders, and the surprising rise of Donald Trump all provide evidence that Americans are feeling an uneasy shift that they have a hard time identifying. Some blame big government. Others blame big business. However, I believe that the suffering we endure comes from the advancement of impersonal bureaucracies that Max Weber warned about.

Trying to break free from the iron cage should be something we can all unite on, but we won’t because our bureaucracies have become so specialized; so specific, that we argue about which specific system is oppressing us rather than recognizing that all of us are oppressed in some way. We often hear that “bigger is better,” but I would argue that with increasing bureaucracy – bigger is badder.

About the author: Alexander Simmons is a Sociology Ph.D. student and Graduate Assistant at the University of Nevada, Las Vegas. He obtained his B.A. and M.A. in Sociology from UNLV as well. His areas of research include Sociology of Religion, Sociology of the Supernatural, and Cultural Sociology. He can be contacted at alexander.simmons@unlv.edu.

One thought on “Bigger is Badder”