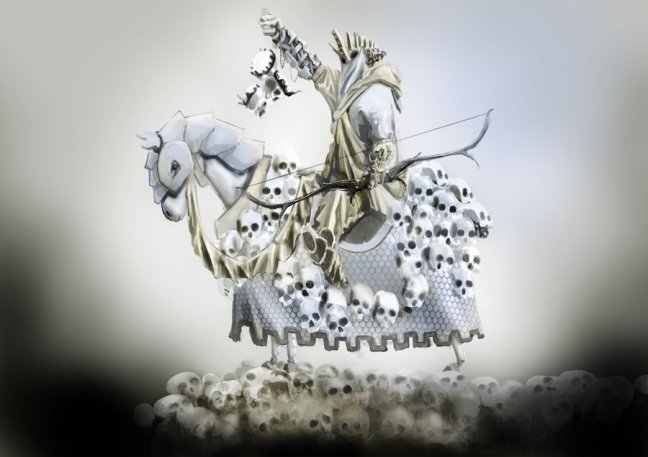 After Satan and his angels were removed from Heaven, they came to Earth and mated with human women. Their offspring were giant super humans. That is to say, they were godlike. The Bible says:

Genesis 6: 1-4 And it came to pass, when men began to multiply on the face of the earth, and daughters were born unto them, 2 That the sons of God saw the daughters of men that they were fair; and they took them wives of all which they chose. 3 And the Lord said, My spirit shall not always strive with man, for that he also is flesh: yet his days shall be an hundred and twenty years. 4 There were giants in the earth in those days; and also after that, when the sons of God came in unto the daughters of men, and they bare children to them, the same became mighty men which were of old, men of renown.

Gen. 3:15 says “And I will put enmity between thee and the woman, and between thy seed and her seed; it shall bruise they head, and thou shalt bruise his heel.” This can be taken quite literally, as it refers to Satan becoming a serpent, but look where it says “thy seed.” Why would such a reference be made if Satan (rather than the serpent as most people take this verse to mean) did not or would not have offspring? “Her seed” is Jesus Christ, and “thy seed” is Antichrist/Apollyon.

Revelation 9:11 says “And they had a king over them, which is the angel of the bottomless pit, whose name in the Hebrew tongue is Abaddon, but in the Greek tongue hath his name Apollyon.”

Apollyon? This sinister being that I believe to be Antichrist just happens to have a Greek name VERY similar to the god of the sun.

Apollo’s birthplace, Delos, was chained to the bottom of the ocean. Apollyon will rise from the Bottomless Pit (Rev. 9)

Apollyon is the first horseman in Rev. 6:2. He is described as sitting on a white horse and having a bow. However, there is no mention of arrows. First of all, many Bible scholars believe this to mean that he has an empty quiver making his conquering of the Earth without force. This has come to mean that he is a politician, because who else could conquer the world without war? I have recently heard that perhaps his arrows are in his mouth.

Rev. 19:15 talks about Christ’s return, describing that “out of his mouth goeth a sharp sword…” If Jesus has a sword in his mouth, perhaps Antichrist has arrows in his. His words are sharp—the weapon of a true politician. It makes sense to me.

Regardless, Apollyon’s weapon is a bow. Is it merely coincidence that Apollo is the god of archery?

Rev. 9:14-15 says: “Saying to the sixth angel which had the trumpet, Loose the four angels which are bound in the great river Euphrates. 15 And the four angels were loosed, which were prepared for an hour, and a day, and a month, and a year, for to slay the third part of men.”

There are currently four angels bound under a river in Iraq. These could very well include Poseidon and his son, Triton, but the Greeks also worshipped Nereus—the Old man of the Sea. Achelous is the Greek river god. Alpheus is a river god of Arcadia. Anapos is a water god of eastern Sicily. There are dozens of other water deities in the Greek tradition. I believe any foursome of these beings could be the angels under the Euphrates.

I understand that this could very well be coincidence. The similarities are striking, at best. I believe them to be more than happenstance. I believe that the fallen angels and their half-breed children were worshiped as gods by primitive civilizations, and that Apollo is Antichrist.