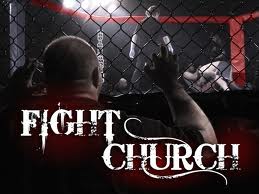 I just watched a documentary on Netflix called “Fight Church” about the increasing number of American pastors and churches that not only accept, but participate in mixed martial arts.

The argument that the movie makes is this: should Christians engage in an activity that inevitably ends with two people trying to physically harm one another?

My quick answer to this, is yes. MMA has become a sanctioned sporting event rather than a barroom brawl or street fight. I personally see no issue with engaging in consensual physical competition, even if it includes blood or head trauma. What is the difference between MMA and NFL in that regard?

That is not my ultimate takeaway, however. One of the pastors featured spoke of the emasculation of the modern church as he proudly stood next to his young son, each holding a handgun and firing at targets. This is the sentiment that actually got me thinking. Is it true? Have our churches become too effeminate?

I think the answer to this is both a yes and no. It is more complex, of course, than any one word can describe. Unfortunately, I would have to lean more toward the “yes” side of the equation.

When I was a child, I remembered hearing of Hell, the Lake of Fire, the coming judgment, and the penalty of sin in explicit details. For instance, at one particularly memorable session at a church sponsored summer camp close to twenty years ago, the speaker asked us to tense up every muscle in our body at once and hold it. We obliged, and the pain was quite palpable (and I encourage anyone reading this to try it out for about 15 seconds to get the full effect). It became unbearable after only a short time, and the speaker informed us that the pain in Hell would feel like that, but worse and for eternity! It was a powerful enough experience that I still remember it, and quite often, actually.

Now I sit here and think back to the sermons I have heard for the past decade or so. None of them have been nearly as powerful. For all the talk about how great our God is, and how loving, merciful, and rewarding a relationship with Christ can be, I have not heard a preacher (and I have sat under several) preach a fiery sermon that scares me since I was a child.

The first question is why did they want to scare children in past decades? But more importantly, why do modern pastors not want to scare adults? Has it become a matter of political correctness? Perhaps it is due to religion being more appealing to women, statistically speaking. Has the message of the Bible become soft? The answer to the last question is no. The Bible never changes, so something in the current church climate has.

Jesus spoke of love. God is love. Love one another; love your neighbor and love your enemy. Love is amazing, and we should be a loving people. Christians should spread the message of love, and we sometimes need reminded that Jesus loves us, even as we are decrepit sinners.

However, Christ also got angry. A good healthy rage needs to be discussed from the pulpits as well. Jesus turned over the tables at the temple because of corruption in the church.

Well, friends, our church has been corrupted as well. False doctrines threaten our heritage. Pastors across the world are succumbing to political pressures and have spouted heretical, anti-Biblical, cowardly nonsense. Some, like Rob Bell have begun to doubt the existence of Hell and The Pope has become a global warming loving socialist. The Westboro Baptist Church protests military funerals to make a political statement that “God hates fags” which is, of course, completely against the scriptures telling us to hate the sin, but love the sinner.

These are the public representatives of our Faith.

What do our pastors preach about, rather than this distortion of Christianity? They compensate by speaking almost exclusively about the love of God, rather than the ire of an angry God.

Where is the outrage? Our pulpits are largely empty of any passionate defense of our Faith against the impostors that seek to destroy Christianity from within. Moreover, it seems to me, that modern pastors are scared to death to deal with the implications of government intrusion that we have seen across the United States or even the atrocities of ISIS in the Middle-East.

If you are a Christian business owner, the odds are that your pastor has not publicly addressed that our government will inevitably force you to placate all customers, even if you find it morally reprehensible to do so. I am still waiting to see a public outcry of preachers who take a stand against performing gay marriages. The government has yet to enforce that policy, but you would have to be naïve to think that it will not happen. Maybe they are waiting until someone loses their tax-exempt status before the legion of leaders stands in protest.

As always, Christians will be reactive, rather than proactive.

I have yet to see an outpouring of Christian leaders that take a stand against the Islamic murders of our brothers and sisters overseas. At my own church, the mass beheadings were a footnote during one sermon right after the killing of the 21 Christians by ISIS. More believers have fallen under the Muslim sword since then, but the topic has yet to be addressed consistently from our pulpit.

So yes, Christians have been neutered by political correctness and other social pressure. We have been emasculated. However, churches are doing a great job at building up strong, spiritual men because of the focus on being leaders in the home.

My church does an amazing job at pushing home leadership, which is anything but a feminine ideal. I know there has been similar happenings in other churches. This is refreshing, and it hits home because it is a conceivably easy task compared with changing the world.

But we are supposed to change the world.

We are supposed to be soldiers. We are to put on the armor of God and go to battle against spiritual wickedness. Well, is there anything more wicked than Planned Parenthood selling baby parts for profit, mass murders in the name of religion, or race riots that seem to be catching like wildfire?

If David had the modern Christian mindset, he would never have stepped up to Goliath until half of the Hebrew army was slaughtered, and then he would have but whimpered and offered the murderous giant a word of love and encouragement.

If our Founding Fathers were like us, we would still be speaking with a British accent and drinking Earl Grey tea with extended pinkies while singing “God Save the Queen”.

We need not start another Crusade, mind you, but we are even too fearful to speak about uncomfortable issues on social media. How could we ever think it possible to defeat evil? God is on our side, and I cannot imagine that he is happy with the sniveling weaklings that Laodicean Christians have become.

We are apathetic and apologetic, and our leaders deserve a large part of the blame. The rest of us are at fault as well, and probably even more so. Rather than getting fired up, we are complacent and overly self-reflective.

The world around us burns while we pretend that the only control we have is within our own home.

God help us, because we can no longer help ourselves.

One thought on “Has the Church Lost its Fight?”