At the time of this article, Wayfair Furniture has found itself embroiled in a massive conspiracy theory involving sex trafficking. The claim is that Wayfair is inexplicably charging thousands of dollars for merchandise that shares names with missing persons.

Wayfair denies the allegations (of course). What I do find interesting is the statement that “The products in question are industrial grade cabinets that are accurately priced.”

This might very well be true. They claim that they removed the cabinets so they could rename them and provide more accurate descriptions.

However, they have not addressed the other strangely priced items like baby art and throw pillows for $10k-30k. I’m not sure how industrial grade those are. 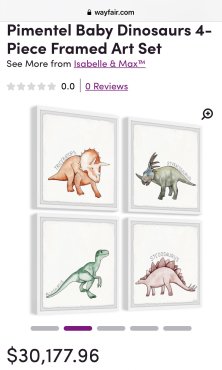 This is rife for a good, old fashioned, conspiracy theory. It has all the necessary elements:

I will admit that it is not a topic that I have done a lot of research on. I wish I would have done so. I also wish I did not, because the truth is frightening.

“The International Labor Organization estimates that 40.3 million people are trapped in human trafficking globally — 71% of whom are women and girls and 25% are children.” – From a CNN article about trafficking near the Super Bowl.

These are staggering statistics. When compared to many of the other social problems discussed at length in our universities and media information centers, one has to wonder why it takes a back seat to police brutality and Trump tweets.

To put these numbers in perspective, at the peak of slavery in the Civil War era, there were an estimated 4 million slaves in the United States. There are ten times that number of slaves trafficked in the world right now.

“According to Polaris (the nonprofit organization that runs the national human trafficking hotline in the United States and which also boycotted the White House Summit), examples for private sector involvement in human trafficking are abundant: traffickers use banks to deposit and launder their earnings; they use planes, buses and taxi services to transport their victims; they book hotel rooms integral also to sex trafficking; and, they are active users of social media platforms to recruit and advertise the services of their victims.” From a Forbes article on the $150 BILLION human trafficking industry.

The layers of trafficking are many. The apparatus is well organized and funded. The players are extremely wealthy and powerful.

Is it beyond the realm of possibility that a major corporation like Wayfair is somehow involved? Not at all.

That does not mean that they are though.

One of the main pieces of “evidence” presented against Wayfair is an image of Ghislaine Maxwell, famous for being the “madam” (and probable girlfriend) for Jeffrey Epstein’s sex trafficking operation, alongside a man purported to be the “president of operations” for Wayfair.

This has been thoroughly debunked, but the theory continues to soldier on.

Another claim is that copying the SKU of certain products into a Russian search engine produces images of children – particularly young girls. Someone on Twitter (not me, because I’m not crazy) discovered that the images are randomized and the Russian search engine is apparently mired in allegations of sharing images of underage girls when searching unrelated topics.

I will take their word for it!

Others have pointed to the relationship between Wayfair and BCFS – a “human services” organization who assisted with detaining illegal immigrants at the border. If you recall, there was a Wayfair walkout because they were selling beds to BCFS run detention centers a couple years ago.

Of course, this is an interesting charge because BCFS is very active in anti-trafficking awareness programs.

Because I cannot verify that the images of uber-expensive baby blankets and cabinets are real, I am not able to confirm or disconfirm their validity. The fact that the company itself has come out and admitted that the pricing of the cabinets is “accurate” lends credibility to that charge.

There are videos available across social media of people typing names into search bars of pillows that change pricing from $46.99 to over $10k when the first letter is inputted. Faking a video is incredible difficult, but not impossible.

For the sake of argument, I will say that the videos are credible. What could be happening?

I believe that Ockham’s razor would demonstrate that Wayfair is likely a victim of coincidence, incompetence, and conspiracy theory activists.

There is STILL a possibility of criminal behavior somewhere in the process – whether laundering, fraud, or trafficking. I believe the federal government should investigate these allegations, and be as transparent as they can be about the findings.

Of course, this will likely not satisfy the deepest conspiracy theorists. Transparency might also spook traffickers and cause them to be more careful if they know that their operations might be outed on social media.

In the end, all I can do is present the evidence as I see it and possibly provide some reasonable opinions. Whether you agree or disagree, I hope you keep an open mind and take trafficking a bit more seriously now that the conversation has burst onto the scene.

Whether or not Wayfair is nefarious, we should work to learn more about and help solve the problem of human trafficking in this nation and around the world.

I am first and foremost a Christian. I am a family man; a husband to a lovely woman and father to four beautiful little girls. I am published opinion writer, an avid connoisseur of the interactions of self and society, and have an MA in sociology. I created a blog as both catharsis for my never ending self-study of the world around me, and as a means to connect with friends, family, and like-minded strangers. View all posts by Alex Simmons